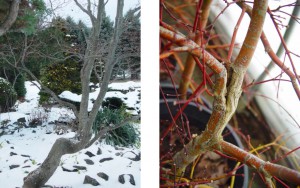 It’s an unfortunate fact of nature that Japanese maples are made of wood, and therefore it’s possible that your prized specimen could break a branch at some point. This may happen under the weight of a heavy snow—especially if the tree still has most of its leaves. A branch could also be snapped during a storm with high winds, so neither the North nor the South is immune to such damage. Even when Japanese maples are young and supple (only a few years old), you might wake to discover several thin branches inexplicably torn off and the bark stripped away from the trunk by critters- but that’s another post…

To Prune or Repair a Broken Japanese Maple Branch

Its a good idea to check your Japanese maples after a storm with high winds or heavy snow. Mending broken branches is fine if they are not too far gone, so getting to them quickly is essential when trying to save a damaged branch. As long as the cambium layer is intact, it can mend itself with a little help.  But as the tree ages and the branch becomes larger and heavier, there is still a chance it could completely break off since it’s not as strong as it once was. If the tree is young, there is plenty of time for it to grow out and still have a nice shape, so I would recommend cutting the branch off now rather than risk another break when the tree is mature. If the tree looks misshapen with the branch gone, you will have to prune it and reshape it, and it may take a few years before it looks nice again. New branches will begin to grow from the broken area, and you’ll have to pick one that will give the tree the best sense of balance. This would be the same technique for squirrel damage on young Japanese maples.

If your branch is split, but still attached and freshly broken, there’s a chance you could save it by bolting, tying, or taping it back in place. While having to prune off a major branch can be heartbreaking at the time, it could result in a uniquely shaped Japanese maple that one day is prized for it’s individuality.

The photo on the left is of Acer Palmatum Bloodgood that lost one of it’s two major limbs (literally cutting the tree in half).  It was devastating, but the tree is thriving at 30 years old, and with the careful addition of other specimens, rocks and water features, this tree has become a centerpiece of the garden. The odd shape and leaning habit makes it look much older than it actually is, and brings a lot of movement into the garden.

The photo on the right is of Acer Palmatum Dissectum Baldsmith that split, but was able to be repaired. It lives in a pot, and is thriving as well. While it’s healthy now, the break may one day invite disease, insects, or simply split again as the tree ages and endures another nasty battle with inclement weather. But, then again, it could do fine. It’s a gamble worth taking. If I did prune the branch off, half the tree would be gone. With weeping Japanese Maples, it’s more of a challenge to find a balanced shape after a major break. Therefore, something that is one sided would be used beside a rock, arching over a stream, or tucked in with some other bushes hiding the bad part. So, there would always be a place for a damaged Japanese maples somewhere in the garden. No need to throw them away. Just be creative, and use their new shape to your advantage.